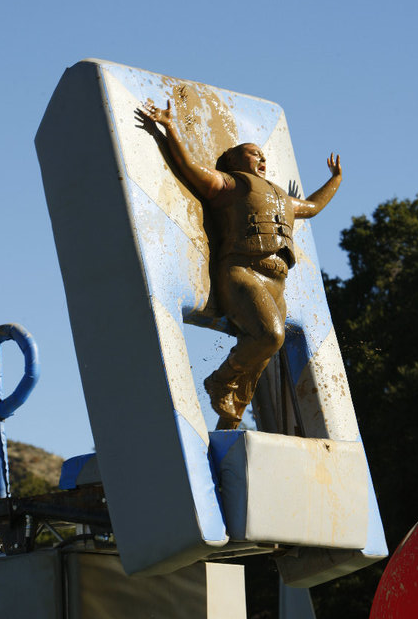 While not a true obstacle, the motivater is part of an obstacle, as are the Big Balls. This was made to time people on the Big Balls. It has been used in the form of a platform that flings you at the Big Balls, or something like a treadmill that flings you at the Big Balls. The original motivator was something of a fifth Big Ball. It was a big red ball that hit you from behind. It has also been called "The Snow-tivator," for Winter Wipeout. Please add the pictures of all of the Motivators, including the Snow-tivators. "Goodnight and Big Balls."- John Henson. The first motivator was a red hammer. The next motivator was the flap motivator as depicted in the photo. It was perfectly hidden in the platform. The next one was the treadmill. While this helped contestants get as far to the 3rd ball, and in some cases the 4th. They never really got to the platform to the other side. The last one was a motivator with 2 big balls on it. It spun around in a circle. And flung the contestants to the big balls. Next, a guardrail served as a motivator for the rest of Season 4. In Season 5, the flap motivator came back for Winter Wipeout with a few modifications. 1st, the motivator flung when the contestant stood largest part of the motivator. Causing contestants to fling as far as the 4th ball. A new motivator was introduced called the "Multi-vator." It consisted of a small motivator that shoved the contestants to the platform. The platform to the Big Balls flung them as far as the 4th Ball.

Also, a hydraulic platform served as a motivator for S5x10 and other episodes.

Retrieved from "https://abcwipeout.fandom.com/wiki/Motivator?oldid=7018"
Community content is available under CC-BY-SA unless otherwise noted.